↓ Skip to Main Content
Answer Fitness® > Fitness How To > Am I Fat? | Why Body Fat Percentage Is More Important Than Weight

Am I Fat? | Why Body Fat Percentage Is More Important Than Weight

Posted in Fitness How To
59
SHARES
ShareTweet

Heres a Little Secret: The scale lies. Learn why you should focus on decreasing your body fat percentage, instead of just your weight. 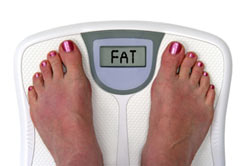 Stepping on the bathroom scale is a daily ritual for many dieters, athletes and fitness enthusiasts. After all  being healthy and in-shape means weighing less, right?

Scales seem to be everywhere: The home bathroom, the gym or health club locker room, and  of course the doctors office.  Were a society increasingly obsessed with our weight, but ironically, one that is becoming fatter than ever.

But what if you knew that your trusty scale was deceiving you? What if you found out that losing a pound or two (or even five) doesnt mean youll look any thinner or more in-shape? What if I told you that losing weigh

t is actually making you fatter?

Why Weight Loss Should Never Be Your Goal

Our preoccupation with moving that pointer on the bathroom scale down closer to zero is at the root of most peoples frustration with becoming healthier and more fit.  Crash diets, fad diets, endless hours of cardio, extreme calorie restriction and eating disorders can be traced directly to our desire to step on the scale and see that weve lost weight.

Yet the number that you see on the scale each morning is a terrible indicator of body composition.  Weight alone cant tell you anything about the distribution of that weight. It doesnt take into account the ratio of fat to lean tissue, which can cause very lean people to think they are fatter than they really are, and fat people to think they are leaner.

In other words, losing weight can actually be a bad thing, especially if you are doing it at the expense of lean tissue like muscle.  If all you are using to gauge your fitness progress is scale weight alone, you are only getting half-the-picture.

Body fat percentage is the only truly accurate way that you can measure your body composition.

Forget about how much you weigh or what your BMI (Body Mass Index) is. Instead, focus on your ratio of lean tissue to body fat.  Once you do this, youll actually start looking and feeling better. And it will change your mind about the long-term effectiveness of crash diets and the basics of your workout routine.

Your scale weight is a measure of your bodys total weight: this includes body fat; lean tissue like muscle; your internal organs like the heart, lungs, and liver; the food and liquid currently passing through your digestive tract; water retained by body tissue; and skeletal material like bones and their connective tissue.

The number the scale displays when you step on it doesnt make distinctions between they types of weight it is measuring. It just lumps it all together.

But it should make distinctions.

A person can actually have a high body weight on the scale, but be extremely lean. I know this runs counter to what youve heard, but its true.  What really matters is how much body fat you have sitting on top of all of that lean tissue and skeletal and connective material. If you have a lot of body fat, youll appear fat and bulky, if you have very little, youll look lean and slim.

And heres the key point: This holds true regardless of your weight.

The Differences Between Body Fat and Muscle

Body fat (adipose tissue) is metabolically inactive. This means its primary function is to store calories, not to consume them.  A pound of fat burns around 2 calories per day to maintain itself. The purpose of body fat is to store energy (in the form of excess calories) for use later, when food is scarce. This is an evolutionary adaptation based on the way we lived thousands of years ago, when the availability of food was spotty.

But today, people can consistently consume enough calories (and often more) to maintain their basic functions.

Fat storage is not as critical as it once was, yet we continue to eat as if famine was just around the corner. Even worse, changes in our diet from whole grain, complex carbohydrates to highly-processed foods have encouraged our bodies to store more calories as fat, even though its unlikely we will ever need them.

Muscle, on the other hand, burns around 6 calories per day and that is at rest.

Exercise the muscle (for example, during weight training) and you can burn an upwards of 250 calories, depending on your existing levels of lean body mass.

Your body displays fat and muscle differently. One pound of muscle looks very different on the body from one pound of fat. Muscle makes you appear leaner, while fat just well makes you look fat.

Increasing your ratio of muscle to fat can make you look more in-shape, even though the scale may say you are heavier.  Likewise, you can actually lose a lot of weight, and look extremely out of shape. Fitness trainer and natural bodybuilder Tom Venuto calls this the fat skinny person syndrome.

This is why looking only at the weight on a scale lies.

Body Fat Illustrated: The Proof is in The Pictures

The best way to illustrate how muscle itself make you look more lean, versus scale weight is to see some actual real-world examples.

Lets take a look at two picture to see why.

First, lets look at Nicole Richie (she is about 5 1 and around 95 lbs in this picture): 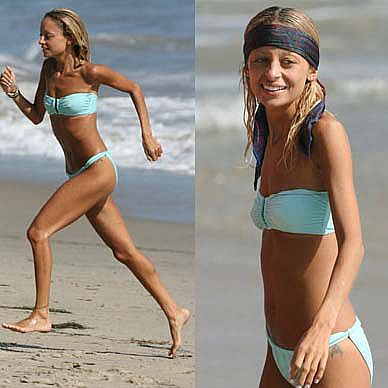 Now, take a look at someone like Michelle Parker, a fitness model with the exact same height as Nicole Richie, but she weighs ten pounds more in this picture: 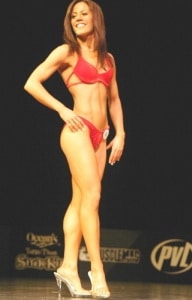 Or how about IFBB Pro Fitness competitor Jen Cook: 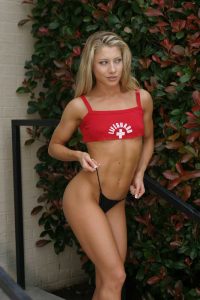 Jen Cook is the exact same height as Nicole Richie, but her weight falls between 117 lbs (off-season) and 108-110 lbs (leading up to a competition.) I would estimate Jen probably between 9-13 percent body fat here.

One more great example: fitness model and actress Amanda Carrier. Amanda is 55 and says her weight is usually between 125-130 lbs at 14-16% body fat.

No one would ever accuse Amanda (who is also a professional swimwear model) of being overweight. Yet, her scale weight might surprise many people who assume she is much lighter than 130 (a very healthy, lean weight, by the way.) Even more impressive, Carrier says she is able to more or less maintain that body fat level without going through the draconian bulking and cutting cycles of female fitness figure competitors. 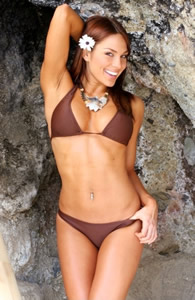 So you tell me who is in better shape? Which of the three has those coveted great abs and amazing tone and muscle definition?

Weigh More and Look Better? Why Weight Alone Is Deceiving

Nicole Richie clearly weighs less. But I would estimate that Michelle, Jen and Amanda have at least 1/3 more muscle mass than Nicole and weigh 10-20 lbs more (which is actually a substantial difference at their height.) And neither of them look bulky or overly muscular. In fact, they probably represent what most women would consider to be an ideal bikini-ready body.

Yet, if you depended on scale-weight alone to determine body composition, Michelle and Jen would lose out to Nicole Richie, which would be clearly absurd and inaccurate. And because Michelle and Jen carry more muscle, they are more metabolically-active than Nicole Richie. That means that even at rest, they burn more calories naturally than Nicole (and therefore, can actually eat more.)

Think about that for a second. The heavier of the two actually burns more calories doing nothing more than the lighter woman because they have more muscle.

Extreme calorie restriction has left Nicole with little muscle mass, which translates into a flat, boney appearance. Bottom line is that she looks unhealthy compared against Michelle and Jen, who are fit, toned and clearly in great physical shape.

My point here is not to pick on Nicole Richie, who clearly is struggling with an eating disorder, but rather to show that by constantly focusing on bodyweight, many people sabotage their ultimate goal of improving their appearance and becoming more healthy and fit overall.

Body Fat By The Numbers

Let me give you one more example, with numbers, to illustrate what Im talking about.

Lets look at two men of the same age:

Jim weighs 170 lbs with 20% body fat. Mark weighs 175 lbs (5 lbs more) at 10% body fat.  This means Jim has 11 lbs of fat on him, while Mark even at the higher weight carries only 5.5 lbs of fat.  Which of these two people will look leaner, despite the difference in scale weight?

Mark will. He has less fat, which means better muscle definition.

So again, the scale lies.

This is why using the scale alone to determine body composition and appearance is a dead-end.

A much better approach is to look at your percentage of body fat compared against your total weight. Once you start thinking this way, that daily weigh-in becomes much less important.

In the course of stripping off fat, you typically will lose some scale weight (along with some muscle,) but your objective should always be to maximize fat loss, while minimizing muscle loss.

If you lose too much muscle along with the fat, your body fat percentage can actually remain the same (or even increase slightly.) And that isnt progress, even though the scale tells you that you are lighter.

An ideal scenario would actually be to see your body fat percentage decrease, while your scale weight remains stable. This means that you are losing fat, without losing and muscle (and in this scenario, you would have actually gained some muscle.)  However, this almost never happens because it is difficult to gain muscle and lose fat simultaneously. So a more realistic goal would be to see moderate weight loss accompanied by a decrease in body fat.

If you find yourself losing weight, but not losing much body fat in the process, then you need to either change your diet or your workout routine. The most likely culprit is that youve restricted calories too much and your body is tapping muscle for fuel. This can be the start of a vicious cycle, because with less muscle, you actually burn fewer calories. And burning excess calories is necessary to lose fat.

Ready to throw out your bathroom scale? Not so fast.

Although Ive been pretty rough on the bathroom scale, the scale is necessary when measuring fat loss because the measurements taken with the calipers need to be calculated against your scale weight to determine what percentage of your total weight is fat.  So while the scale alone cant tell you your body composition, neither can calipers. You need both to get an accurate measure.

How to Choose A Gym Thats Right For You
The Seven Healthy Habits of Highly Fit People
How Often Should I Workout? | Fitness Tips
Personal Trainer: Do I Need One?
What are the advantages of wearing activewear?