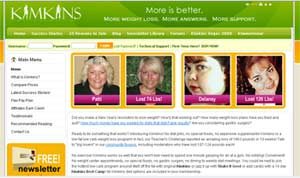 I first saw the Kimkins Diet pop up in the Yahoo Answers Diet and Fitness category about 12 months ago.  Someone calling herself Kimmer was trolling the diet-related questions and posting cookie-cutter answers touting an amazing new diet that was better than Atkins. The claims seemed incredible: weight loss of up to 124 lbs and zero need to exercise.

Being curious about this miracle diet I clicked through.

What I found was typical of a fad diet site: Unbelievable claims of dramatic weight-loss, the usual testimonials (predominately from women) with before and after pictures, and Kimmers story of how she went from fat to model-thin using her own amazing diet plan.

There were even before and after pictures of Kimmer demonstrating her own transformation from morbidly obese to svelte beauty. With her low-cut leopard top and smoky eyes, I had to admit Kimmer looked pretty hot. It was hard to believe she was the same woman in the grainy before picture who looked like she was steadying herself with the handrail to keep from falling over under all that extra weight. 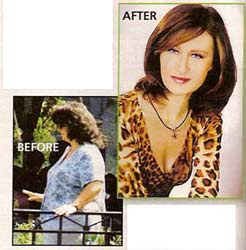 I clicked back to Yahoo Answers, marked her post as spam and moved on.

Over the coming months, I saw a few questions about the Kimkins Diet here and there, posted some responses dismissing it as a unhealthy crash diet and recommended spending your $79.95 membership fee on some healthy, whole food.

I more or less forgot about it.

And then it hit. In June 2007, Womans World Magazine featured a cover story on the Kimkins Diet, complete with the pictures of glowing Kimkins success stories and the sensational headline Better Than Gastric Bypass!

What Is The Kimkins Diet?

The Kimkins Diet website describes the Kimkins diet as a low-fat, low-carb weight-loss program that doesnt require pills, special foods, expensive supplements or exercise. It also presents itself as an alternative to costly gastric bypass surgery, which immediately throws up a red flag that the diet is targeting the most desperately overweight people people who really need the help of a nutritionist and medical weight loss professional, not an Internet guru.

The Kimkins Diet also recommends limiting dietary fiber. In coaching emails to members, Kimmer advises against supplementing with fiber because it causes weight gain (what she actually is saying is that it causes the scale to show weight gain  fiber itself is not digested, so it has no meaningful calories and cant contribute to fat-gain.) Instead, she recommends the use of laxatives to push thr

ough all of that meat and eggs her diet prescribes. Not a good sign. 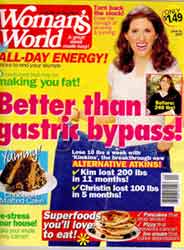 At its core, Kimkins is a variation on the Atkins Diet. But where Atkins has you consume more fat as you reduce carbohydrates (the fat is then metabolized for energy), Kimkins tries to reduce dietary fat to extremely low levels, and has you consume the bulk of your calories in protein. While limiting dietary fat and carbs may seem like a dieting grand slam, its actually extremely dangerous at the levels recommended by Kimkins.

First, you need a certain amount of dietary fat to support your basic daily function

s. And second, protein is not easily broken down for energy. In fact, high protein, low-fat and low-carb diets have a documented history of producing serious nutritional deficiencies, and in some cases have been actually been associated with serious (and sometimes fatal) conditions like sudden cardiac arrest.

In the 1960s and 1970s there were a rash of serious side-effects (and in at least one case, a fatality) associated with low-carb, low-fat, liquid protein diets. Autopsies suggested that two things may have been at work: serious electrolyte disturbances caused by the protein-only diet threw off heart rhythms in some dieters, causing cardiac arrest. In another case, it appeared that there was atrophy of heart tissue, probably the result of the extremely low calories, which caused the body to feed on its own tissue (including heart tissue) to meet its basic energy requirements.

ly restricts fat consumption along with carbs. Whether or not you agree with Atkins high-fat, high-protein approach, Atkins is very clear that reducing dietary fat on a low-carb diet is dangerous and their diet is at least structured to avoid this double-whammy. Kimkins makes no such allowances in their diet, and the complete lack of fruit, whole grains and dietary fiber is a recipe for disaster.

Would you lose weight on Kimkins?

Absolutely. The structure of the diet naturally limits calorie intake to radically-low levels, in many cases youll be eating under a 1000 calories a day, and maybe as few as 500. Anyone

would lose weight at these extremely restrictive calorie levels. The problem is that like any fad or crash diet (for example, the Cabbage Soup Diet, Grapefruit Diet or Master Clense) youd also be losing a lot of key nutrients, including essential vitamins and minerals.

Bottom line is Kimkins is a nutritional disaster with the potential for serious side-effects.  And on top of that, youll be out $80 bucks to boot.

But what about that Womans World article with all of the success stories? What about all of the dramatic before and after photos and testimonials on kimkins.com?  I mean, the diet seemed to work for all of them, right?

Heres where the whole Kimkins Diet story gets really interesting.

A group of skeptical Kimkins dieters hired a private investigator to learn more about Kimmer. Turns out that Kimmer isnt the lean and lithesome siren you see in her pictures. In fact,  Kimmer isnt even named Kimmer her name is actually Heidi Diaz and once you see some pictures of the real Kimmer, youll seriously re-think taking any fitness or diet advice from her.

So without further ado, please meet Kimmer (aka Heidi Diaz), Fitness and Weight Loss Guru, returning home from the CVS (no doubt with a bag full of beef jerky and a giant bottle of liquid laxatives): 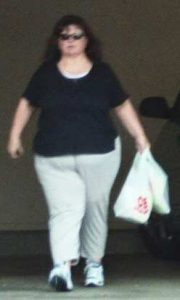 It gets even better.

Those Success Stories on Kimkins.com and in Womans World Magazine also appear to be fake.

Where did the photos come from?

Well, it appears that some of Heidi Diazs most visited websites were Russian dating sites. Thats right, most of her success stories were just a series of photos downloaded off Russian bride sites.  Add a little creative license and you have an instant Kimkins testimonial.

In fact, it turns out that the after pictures of Heidi herself were lifted from sites advertising former Eastern Bloc darlings looking for love in the States. Check out this picture of Kimmer posted last year on Kimkins.com and then compare it to Aleysa, a fetching 115 pound, 27 year-old beauty from Tver, Russia: 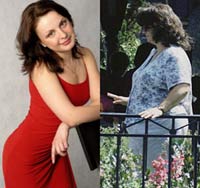 As fast as you can down a bottle of Milk of Magnesia, the Kimkins Diet drew the attention of the media, starting first with an investigative report from Los Angeles TV station KTLA. Hot on the heels of the KTLA report,  ABCs Good Morning America followed-up with a segment on the controversy, interviewing former Kimkins dieter (and the Womans World Kimkins Diet covergirl) Christin Sherburne. Sherburne who actually worked briefly for Kimkins as an admin doesnt have many nice things to say anymore about Kimmer or the Kimkins Diet.

By the time the dust settled, it looked pretty clear that the Kimkins Diet was a big, fat Internet scam one that allegedly netted Diaz well over a million dollars by some estimates.

As word of the scam spread across the Internet, stories started to emerge of how devastating this diet may have been on some of the people who adopted it.

A number of websites and blogs popped up, detailing the alleged physical toll Kimkins had on followers of the diet. It wasnt pretty.  Reported side-effects included:

On top of this, there were the psychological scars former dieters carried as a result of being misled by someone they trusted. In some cases, former dieters have found themselves under medical care in order to recover from damage they claim the Kimkins Diet wrought on their health.

Currently, a group of former Kimkins dieters are pursuing a class-action lawsuit against Heidi Diaz, accusing her of false-advertising and fraud.

What she did was she seized on peoples hope for weight loss. She lied about her own success story for profit, said John Tiedt, an attorney who represents the plaintiffs.

Last fall, a judge froze Diazs assets and Diaz herself confessed to being Kimmer and admitted that some of her claims about her own weight-loss werent accurate.

The lawsuit is still pending and Kimkins.com continues to operate albeit, without the pictures of Russian mail-order brides.