Find out whether the Portfolio Diet can help you lower cholesterol naturally through diet  … without Statin drugs.

Could dramatically lowering your cholesterol simply be a matter of eating the right combination of foods? 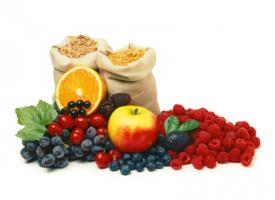 Dr. David J.A. Jenkins thinks so.  And if his research is right, it might actually be possible to cut cholesterol significantly just by eating the right foods, in the right combinations.

Jenkins, a nutrition and metabolism expert at the University of Toronto and the “Father” of the gylycemic index, calls it the “The Portfolio Diet” and the concept is actually quite straightforward: By combining a variety of foods that have been shown to lower cholesterol on their own, it may be possible to lower serum cholesterol naturally without resorting to prescription statin drugs.

Besides having profound public health consequences, this approach to eating and cholesterol control also promises to lower the cost of treating high cholesterol, potentially saving millions in prescription drug costs and health issues that arise from the side-effects of prescription statin drugs.

The Portfolio Diet: The Sum Is Greater Than The Parts?

For more than a decade, researchers have known that certain foods like oatmeal and soy can help lower blood cholesterol levels. However, until recently these foods have been viewed more or less independently of each other.

Dr. Jenkins decided to take a look at how combining a variety of foods that have been shown to reduce cholesterol might collectively work together, providing more bang for your buck.

Jenkins’ study took a look at forty-six healthy, middle-aged adults who had high cholesterol. The subjects were divided into three groups:

All groups experienced a reduction in low-density lipoprotein cholesterol (LDL), and not surprisingly, the statin group experienced the most dramatic drop — a 30.9 percent reduction.

However, what did surprise researchers was the reductions seen in the porfolio diet group, which experienced a 28.9 percent reduction in fasting blood cholesterol levels, making it nearly as effective at cutting cholesterol as prescription statin drugs.

The American Heart Association estimates that more than 140 million Americans have cholesterol levels that are either borderline-high or high based on fasting lipid tests. And of these, about 37.2 million American adults have levels of 240 or above.

Until recently, most doctors treated high cholesterol with a combination of modifications to the diet and exercise. However, the past decade has seen a influx of cholesterol-lowering prescription drugs (the majority of which belong to a class of drugs known as “statins”) enter the market, and increasingly doctors have turned to medication as a way to treat borderline-high and high-cholesterol.

Last year alone, almost $30 billion in prescription cholesterol-lowering drugs written were written in the US, and Americans spent $10 billion in 2007 on the statin drug Lipitor, alone.

The side effects of statin drugs like Lipitor and Zocor can range from the mild to the severe, including numbness and tingling in extremities, memory loss and problems with attention, headaches, fatigue and muscle weakness.

In severe cases, people may serious reactions to the drug, resulting in permanent muscle damage. A Danish study found that long-term statin drug users had a 4-14 times higher risk of peripheral neuropathy, nerve damage that can cause weakness, pain, and trouble walking.

More troubling is recent research from the University of California San Diego that suggests doctors may frequently ignore or dismiss patient concerns around side-effects of statin drugs, despite receiving remarkably consistent reports of these side effects across their patients currently taking statin drugs.

This may have broader safety implications, since the US Food and Drug Administration (FDA) relies heavily on adverse reaction reports from doctors in the field to identify serious health issues associated with prescription drugs. This can result in the under-reporting of side effects from statin drugs or create a false-sense of safety among doctors and patients.

Yet a growing body of research, including Dr. Jenkins’ work around The Portfolio Diet, suggest that many cases of high cholesterol can be treated successfully with diet modifications alone.

The problem, doctors say, is that historically, many people are reluctant to make the necessary changes to their diet, or struggle to maintain cholesterol-lowering diets over the long-haul.

However, as more people turn to statin drugs to get their cholesterol under control and experience some of the unpleasant or harmful side effects of prescription cholesterol-lowering medication, there is renewed interest among some statin-users in more natural, non-prescription methods for lowering cholesterol, including things like The Portfolio Diet.

The Portfolio Diet: How Do You Do It?

The portfolio of foods that the subjects in Jenkins’ study ate may already individually be part of your diet, especially if you watch what you eat and try to include a wide variety of foods like nuts, fresh vegetables and complex carbohydrates into you meals. All of these foods alone can have a modest impact on lowering or maintaining low cholesterol levels.

Is the Diet Sustainable?

If the diet seems regimented, it is.

While nearly all of these foods should already be a part of a healthy person’s diet (with the exception, perhaps of plant-sterol-enriched spreads), it may be difficult for people who aren’t used to eating this way to stick close enough to the diet to achieve cholesterol-reductions on par with prescription statin drugs.

The subjects in Jenkins’ first study cut out all meat and eggs and substituted soy products instead, which can be a challenge for most omnivores.  The diet would, however, be a cinch for vegans or vegetarians, but those groups probably already have low-cholesterol.

Jenkins and his team were aware of this issue and have since conducted a follow-up study in 2006 to look at how The Portfolio Diet might work in the “real-world” versus a carefully monitored and controlled lab environment.

In that study, they expanded their group to sixty six adult men and women with high cholesterol. For 12 months, the group was put on a prescribed diet high in plant sterols, soy protein, viscous fibers and almonds.

While the results weren’t quite as impressive as with the carefully-controlled diet, the reductions in cholesterol were still significant — more than one-third of the subjects who attempted the portfolio approach to eating saw at least a 20 percent reduction in serum cholesterol levels, which is not statistically different from what the same people would have experienced from first-generation statin drugs.

“One-third of the patients achieved and sustained a clinically meaningful reduction in LDL cholesterol of more than 20 percent,” explains Dr. Cyril Kendall from the University of Toronto and co-author of the study along with Jenkins. ”The extent to which they lowered their LDL cholesterol level depended on how closely they followed the diet by eating certain heart-healthy foods.”

In otherwords, just changing your eating habits to include a generous daily dose of these four cholesterol-lowering foods may be enough to produce significant, natural reductions in blood cholesterol.

Getting Started with the Porfolio Diet

As Kendall and Jenkins point out, the effectiveness of The Portfolio Diet really depends on how committed you are to including heart-friendly foods into your diet. Incorporating even small amounts of all of these foods in your diet daily is a good start, especially if you also reduce your consumption of foods and cuts of meat that are high in saturated fat.

Adding in sticky fiber is really not particularly difficult and can be easily accomplished by eating a bowl or two of oatmeal daily, along with other sources of soluble fiber like granola or even psyllium fiber from things like Metamucil. While Jenkins’ studies looked specifically at almonds, other nuts like walnuts and pecans also have been shown to reduce cholesterol. Adding in sources of soy like tofu or meat substitutes (which are actually quite tasty these days) will also help. Substituting plant-sterol enriched spreads for normal margarine on your morning toast or baked potato can help you include plant sterols in your diet.

Again, even adding a few of these foods into your diet each day can help reduce cholesterol or prevent you from developing high cholesterol. So something is better than nothing.

What If I’m On Statin Drugs and Want to Try The Portfolio Diet?

Criticisms of The Portfolio Diet

The research conducted by Jenkins is not without it’s critics.

The initial research on The Portfolio Diet approach to cholesterol-reduction was funded by four organizations: the Canadian government; Unilever, the maker of Take Control, a margarine-like spread that helps to lower blood cholesterol; Loblaw, Canada’s largest food distributor; and the Almond Board of California. So the source of the money for the study was provided by companies and organizations that had a vested interest in the showing that these foods can lower cholesterol.

Does that mean the studies are somehow invalid?

Regardless of what your personal feelings are about scientific studies being underwritten by private commercial entities, there is no evidence that any of the researchers’ results were biased by their funding sources. While the foods they chose to include in the research were associated with these organizations, there is a broad-range of research (not all of it funded by food companies) that has demonstrated that these foods may lower cholesterol. Nothing sinister or mysterious there.

One other thing to keep in mind: These are studies published in peer-reviewed journals. All of the data and methodology is available for other researchers to study. If they are flawed or biased, there are plenty of qualified eyeballs looking carefully at the data to find weaknesses. And other researchers can always — and often do — attempt to duplicate the results themselves. That’s just how good science works, regardless of where the funding comes from.

Can The Portfolio Diet Help You Lose Weight?

While The Porfolio Diet is not intended to be a weight-loss diet — it’s rather a pattern of healthy eating that encourages management of cholesterol — you may lose weight on the plan, especially if you substitute these foods for less healthy versions that you may be eating now. While nuts and almonds are high in heart-healthy fats, they are also high in calories gram-for-gram. However, research has shown that eating nuts may actually help control weight.

If your primary goal is to lose weight, this won’t be your plan. However, if you want to eat healthier, improve your cholesterol and possibly lower your risk of heart disease and stroke, The Porfolio Diet may be worth a shot.