Quark cheese is a healthy substitute for sour cream thats low in fat, high in protein and tastes great! 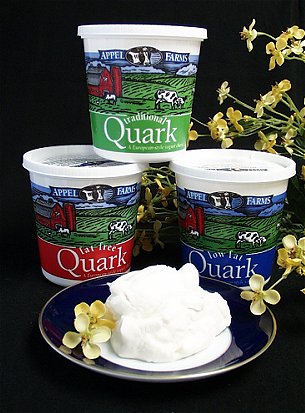 Love sour cream heaped on baked potatoes, nachos or even in your favorite veggie dip but hate the high fat and high calories?

Its time for you to discover the wonders of Quark, a thick yogurt-type cheese. Quark is a great, healthy substitute for sour cream in terms of both flavor and consistency, and blows it out of the water on the nutritional front.

Okay, so it has a funny name. But once you get past that, Quark deserves a spot in the refrigerator of anyone who is interested in healthy eating.

So what is Quark and why should I make it a regular part of my daily diet?

Traditional Quark is a fresh cheese from Central Europe.  It can be solid (but soft), or thick and creamy (like sour cream.) Historically, its been made with whole milk, which of course means it has full-fat as well. However, a number of companies have recently introduced Quark made from low-fat or fat-free milk, which makes it a very healthy alternative to things like sour cream and even cream cheese.  Its similar to yogurt cheese or Greek strained yogurt, but a bit thicker and richer in taste. This makes it perfect as a sour cream substitute.

The primary manufacturer of Quark for sale in grocery stores is Appel Farms in Ferndale, WA.  They offer it in three varieties: a full-fat version, low-fat version and fat-free version. The full-fat youll want to pass on, but the other two are outstanding additions to a healthy diet. If your local grocer doesnt carry it, consider asking them to. Its worth the trouble. Or you can buy it online at German Deli.

How Healthy Is It?

Aside from the fantastic taste and consistency, Quark is great, low-fat, high protein substitute for sour cream.  Lets take a look at it from a nuritional standpoint. A cup of fat-free Appel Farms Quark has:

Now lets compare that to an equal amount of  low fat sour cream :

How Do You Use Quark?

Quark can be used anywhere that you would normally use sour cream or cream cheese. You can spread it on whole-grain bagels;  pile it on top of baked potatoes or sweet potatoes; whip it up into Ranch-style or creamy dressings for salads or greens;  use it on tacos, burritos or taco salads;  and even make an amazing low-fat veggie dip.  It can also be used in baking to make healthier versions of dishes like lasagna and yes even cheesecake.

If youve ever tried substituting plain fat-free yogurt for sour cream but just found the flavor a bit off, youll want to try quark. Its much closer in flavor and texture to sour cream than most yogurts (including greek-style yogurts.)