What Is Textured Vegetable Protein or TVP? | Ask The Fitness Nerd 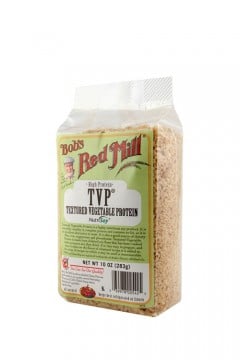 What Exactly Is Textured Vegetable Protein and Where Does TVP Come From?

Textured vegetable protein is generally used as either a meat substitute or meat extender. It’s actually not made out of vegetables like carrots, broccoli or corn, but from soybeans. So technically, the term “textured soy protein” more accurately describes TVP.

Textured vegetable protein is made out of defatted soybean flour, which is a bi-product of the process of making soybean oil. The defatted soybean flour is mixed with water and formed into a dough, and then pushed through an “extruder” where it is heated and emerges as a spongy, fibrous food.

The TVP is then sliced into different size and shapes depending on what type of meat it’s intended to substitute for.

Textured vegetable protein is very versatile in terms of shaping and texturizing, so it can be cut in a way that produces a texture and characteristics that mimic of a number of cuts of meat, include ground beef, bacon or beef strips, steaks, cubes, chunks and even flakes or granules.

Textured vegetable protein, not surprisingly, is very high in protein, low in fat and relatively low in carboydrates.  It is also considered one of the few non-animal based sources of complete proteins.

In terms of it’s characteristics, textured vegetable protein tends to maintain its spongy, meat-like texture even after heating. It cooks quickly, and similar to tofu, has very little flavor of it’s own. This actually makes it ideal for use as a meat substitute, because TVP tends to take on the flavors of other foods and seasonings that you add to it.

As I mentioned earlier, TVP can be used on it’s own to create vegan or vegetarian meatless dishes at home, but it’s most commonly found as the main ingredient in pre-prepared meatless foods like Boca Burgers, meatless breakfast sausage or chicken patties, or meatless ground “beef” like you find in the frozen food section.

Textured vegetable protein also finds its way into dry mixes for things like veggie burgers, and may appear in small amounts in non-vegetarian prepared foods as a meat extender or as a way to boost the protein content of a food.

In fact, anyone who had the pleasure of eating that monstrosity of a “meat” product called the “hamburger” in the high school cafeteria probably got a taste of the wonders of TVP as a meat extender.

The U.S. government and its vast network of food contractors is one of the biggest buyers of textured soy/vegetable protein, using it to boost the protein content and lower the price of beef in school lunches, meals for the military, as well as to feed prisoners.

Prisons love TVP because it’s a cheap source of protein, although the prisoners themselves probably aren’t so keen on it. The government also loves TVP because it gives them something to do with all of those surplus soy beans that result from federal farm subsidies.

How Does TVP Taste?

Again, textured vegetable protein itself has a fairly neutral flavor.  On its own, it doesn’t taste like meat like beef, lamb or chicken — it just has a similar texture to those foods. To get a similar flavor, you have to try some seasoning tricks.

How To Flavor TVP

The palatability of TVP really depends on how you flavor TVP,  whether that is by the manufacturer or at home yourself.

In dishes with a lot of additional, flavorful ingredients such as chili, goulash, tacos or spaghetti sauces, textured vegetable protein actually can be pretty good stand-in for more expensive, fattier meats like ground beef. TVP tends to soak up the flavors in these dishes, and really just provides a meaty texture to the food.

If you are buying dehydrated TVP in bulk and trying to make your own meatless dishes at home, you’ll want to flavor the TVP by combining it with herbs or spices, seasoning mixes or packets or even things like onions, garlic, soy sauce or eggs (if you aren’t a vegetarian, of course.)

Texture vegetable protein has come a long way over the past four decades as a main ingredient in meatless food like meatless bacon or beef strips or meatless chicken patties from manufacturers like MorningStar Farms or Boca.

Many of the meatless products now available in the frozen section of the grocery taste surprisingly good — especially compared to the first generation of meatless foods that began to hit shelves in the ’70s. From a nutritional standpoint, they are considered healthy, primarily because they are high in protein and very low in cholesterol and fat — especially saturated fat.

Soy protein is also one of the four foods that Dr. David J.A. Jenkins of the University of Toronto recommends as part of his Portfolio Dietapproach to naturally lowering serum cholesterol levels without the use of Statin drugs.  Meatless foods are often one of the main sources of these soy proteins for people on The Portfolio Diet.

While clearly there are health benefits to substituting something like TVP for higher-fat sources of protein like beef,  there is a fair amount of debate around how much soy protein a person should be including in their diet.

In 1998, the US Food & Drug Administration (FDA) granted a health claim that “25 grams of soy protein a day, as part of diet low in saturated fat and cholesterol may reduce the risk of heart disease.”

However, a 2006 study by the American Heart Association and published in the journal Circulation challenged this health claim.

The review took a look at a decades worth of research around soy protein consumption and heart disease  and anti-cancer claims and found that soy isoflavones did not reduce “hot flashes” in post-menopausal women and did not reduce the risk of certain cancers, as previously claimed.  Based on this, the study recommended that women not supplement with soy isoflavones.

However, the review did state that including non-supplemental sources of soy protein, such as soy burgers, butters, tofu or soy nuts could be beneficial to cardiovascular health, especially when substituted for higher-fat and higher-cholesterol foods.

This has led to some speculation that it could actually raise estrogen levels in humans, perhaps increasing the risk of certain estrogen-related cancers in women or reducing testosterone levels in men.

However, even here, the research around estrogenic effects of soy protein in men and women is conflicting.

So the debate continues.

Some people also may have or develop allergies to soy products, including TVP.

Next to peanuts, soy is rated the second-most allergenic food to humans and some people find TVP difficult to digest. In those individuals, it may cause gas or bloating, and in some people, more serious reactions similar to peanut allergies. So if you experience any of these side-effects, you might want to find another source of meatless protein.

Many vegans and vegetarians rely on TVP as a major source for non-amimal based dietary protein.

Because vegetarianism is closely tied with “health” and “health food” or “healthy eating”, TVP has by association been often classified as a “health food” — making its way into the bulk isle at natural food stores.

Yet, textured vegetable protein strictly speaking doesn’t really qualify as a “whole food” — since it’s created through a fairly elaborate industrial process. For this reason, whether TVP is truly a “clean eating” food is questionable.  TVP doesn’t grow in the field, it has to be produced in a factory.

For this reason, many vegetarians or even omnivores who are trying to practice a clean eating-style diet will choose less processed, more whole food sources of soy protein — things like edamame, tofu or tempeh.

That said, a few Boca burgers here and there — especially in place of less lean cuts of meat — can support a healthy, clean diet.  As always, moderation is the key. Living off from meatless chicken patties probably isn’t a good idea, but eating a few of them during the week is certainly preferable to downing an Quarter-Pounder with Cheese.

A 1/4 cup dry serving of textured vegetable protein or TVP has:

Where Can I Buy Textured Vegetable Protein or TVP?

You can usually buy textured vegetable protein in bulk at health food stores like Whole Foods, or prepackaged at many grocery stores. You can also buy bulk and organic TVP online at Amazon.com.