MRSA: Is Antibiotic Resistant Staph Lurking At Your Gym?

MRSA, or Methicillin-resistant Staphylococcus aureus, killed more people last year than the AIDS virus. Find out the symptoms and treatment of MRSA infection and how to protect yourself at the gym from this super bug. 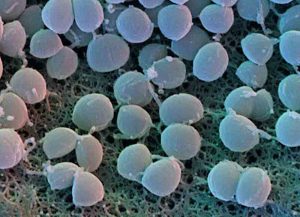 Its silent, invisible and potentially deadly.

And it could be hiding out at your gym, health club or local fitness center.

Its known as MRSA, or Methicillin-resistant Staphylococcus aureus (also called staph) and it has public health officials worried.  Once limited to people with compromised immune systems and people in health care facilities like hospitals, nursing homes and dialysis facilities, epidemiologists have grown increasingly concerned about a new phenomenon: MRSA that has spread outside of health care facilities and seems to infect normally healthy individuals.

Of particular concern is whether MRSA can be spread on surfaces in common shared facilities like public restrooms, schools, dorm rooms and yes gyms.

What Is MRSA and Why Is It So Dangerous?

So what exactly is MRSA?

MRSA is whats often referred to in the media as a super-bug a strain of bacteria that can resist the effects of antibiotics.

Antibiotic resistant strains of bacteria have become increasingly common over the past several decades. While some mutations that result in antibiotic resistance happen as part of natural cell reproduction,  there is increasing evidence that over-prescription or improper use of antibiotics has accelerated the development of super bugs. Indeed, researchers believe that the development of the MRSA bacteria likely was accelerated by overuse of broad-spectrum antibiotics.

Its important to understand that Staphylococcus aureus  is a common micro-organism that is typically present in the nose and on the skin of one third of all people.

There mere presence of the bacterium does not ensure infection, and in many cases, people come in contact with Staphylococcus aureus on a daily basis.

About 20% of people are long-term carriers of Staphylococcus aureus and may show no symptoms. However, if infection does takes hold it can result in everything from mild skin infections like pimples or impetigo, to more serious conditions like pneumonia, meningitis, Toxic shock syndrome (TSS), or septicemia. Staphylococcus aureus is one of the leading causes of post surgical wound infection in hospitals.

The problem with Staphylococcus aureus is that its particularly adaptable to antibiotics. In fact, it was the first bacteria to be found to be penicillin-resistant.  It showed resistant to penicillin in 1947 a mere four years after penicillin became widely available. Since then, the bacterium has continued to evolve resistance to each new class of  antibiotics most recently Methicillin.

The statistics around MRSA are sobering.

Even more alarming to health care professionals in the emergence of something known as CA-MRSA (Community-Acquired MRSA) which is spread not in healthcare facilities among the immuno-compromised, but within larger communities of otherwise healthy individuals, including within correctional facilities, newborn nurseries, among military recruits, and even athletic teams.

This has focused additional attention around whether gym equipment and surfaces in fitness and health centers are providing a perfect environment for breeding and spreading MRSA among otherwise healthy individuals.

But how much of a risk is MRSA to the average gym-goer and fitness buff? And should you really be worried?

How Staph MRSA Is Spread

Typically MRSA staph infections are spread through person-to-person contact. MRSA may also be present on surfaces and equipment.

Again, the bacterium is quite common and nearly one-third of all people have Staphylococcus aureus  present (or colonized) on their skin or within their nasal passages. While infection is much higher within healthcare settings (also known as Healthcare-Acquired MRSA or HA-MRSA) where individuals may be susceptible to infection via surgical or medical procedures, MRSA can also be spread through more casual contact or in non-hospital settings.

Individuals who recently underwent a course of antibiotics, share contaminated items, live in crowded environments or have reoccurring skin infections like acne or even acute skin reactions like poison ivy, are more susceptible to contracting MRSA. The bacterium is generally harmless when confined to the surface of the skin, but infection can take place via breaks in the skin, such as open cuts, sores, or abrasions.

Signs of MRSA Infection: What Does MRSA Look Like and How to Spot a Potential Staph Infection

So what does MRSA look like? And how would you even know if you had a staph infection?

There are a number of signs and symptoms of staph or MRSA infection. These symptoms include:

Again, the critical thing to watch out for is not pimples or bumps, per se, but rather the secondary signs of infection, such as redness or burning.  People may mistake MRSA for spider bites, especially in its very early, emerging stages.  Also, if a bump or cut doesnt show progressive signs of healing within 3-4 days or its accompanied by a fever or flu-like symptoms, its probably a good idea to see a doctor just to be safe.

If left untreated, Staphylococcus aureus or MRSA infections can spread to other organs or systems. Complications of MRSA can include:

A systemic staph infection can not only be very difficult to treat, but deadly.

What Is The Survival Rate of MRSA?

MRSA and Athletes and Fitness Buffs: Should I Be Worried about Staph MRSA at the Gym?

Generally, MRSA doesnt pose a substantial health-risk to gym-goers, provided you take proper precautions. However, their are a number of documented CA-MRSA cases within athletic teams or among otherwise healthy individuals participating in certain contact sports.

Since the staph MRSA requires a break in the skin (or access through mucous membranes), people engaging in high-contact sports that also encourage abrasions to the skin and soft tissue can be more susceptible to MRSA infection.

Examples of these activities include wrestling, rugby and football. Football players who practice or play on artificial turf can be especially at risk, because the artificial playing surface may not only harbor the MRSA bacterium, but also encourage the types of abrasions necessary to facilitate infection. Shared gym facilities, whirpools and showers within a team can help encourage the spread MRSA under these conditions.

MRSA: From the Hospital to the Locker Room

In fact, a 2002 outbreak of MRSA among the University of Southern California (USC) football team highlighted the risks of MRSA among even healthy, high-conditioned athletes.

During the 2002 season, two USC football players were diagnosed and hospitalized for sever complicated skin and soft-tissue infections (cSSTIs) resulting from MRSA infection. One athletes cSSTI developed into necrotizing fasciitis, a form of staph infection referred to ominously in the press and media as the flesh eating bacteria. The other athlete developed a sever abscess in his leg that required lengthy treatment.

The 2002 outbreak, however, was mild compared to what the USC football team experienced during the 2003 season, when 17 of the teams 107 players exhibited MRSA-like infections. Through an aggressive MRSA infection control and prevention program, the university was eventually able to stop the spread of MRSA and limit future outbreaks. The episode, however,  clearly showed the potential dangers of MRSA infection in non-healthcare settings.

Jorge Parada, director of the infection control program at Loyola University Hospital in Maywood, recently told the Washington Post that while the benefits of exercise outweigh the risks of contracting MRSA, the bacterium can be transmitted via shared equipment without direct human-to-human contact and that gym-goers should take some additional preventative steps to safe-guard themselves from picking up MRSA at the gym.

How To Protect Yourself From MRSA Especially at the Gym

The good news is that while MRSA may be difficult to treat once infection has taken place, preventing infection is relatively easy, provided you take a few precautions:

Treating MRSA or other staph infections is dependent on the severity of the infection.

Colonized Staphylococcus aureus  on the surface of the skin or in the nose typically doesnt warrant treatment via antibiotics, although if there is an outbreak, mupirocin antibiotic cream can sometimes be prescribed to asymptomatic carriers to potentially eliminate MRSA and prevent its spread.

Some mild staph infections will heal themselves without the use of antibiotics. However, if the infection is serious, treatment will typically involve draining the infection site regularly coupled with an (often aggressive) course of specific antibiotics.

Because MRSA is resistant to not only penicillin, but also a number of other common antibiotics, doctors have a limited number of drugs available to fight the infection. These include newer antibiotics likevancomycin (Vancocin),  linezolid (Zyvox) and a few others.

Sometimes treatment of severe MRSA infections will involve the use of several antibiotics together or in succession. There are some reports already of a Vancomycin Resistant Staphylococcus aureus  (VRSA) strain, which may indicate the next super-bug doctors will be dealing with.

If you are placed on antibiotics to treat either mild or severe staph infection or MRSA, its critical that you complete the entire course of antibiotics. Some people stop taking the medication after symptoms improve or go away, thinking they are cured and do not complete the full course. This can not only result in a re-infection, but also may contribute to additional antibiotic resistance. Bottom line: Take the medication exactly as your doctor prescribes, dont skip doses, and finish the entire course.

While MRSA certainly can be scary, its important not to overreact or avoid activities you enjoy.

MRSA transmission and infection is generally easy to prevent if you pay a little extra attention to basic hygiene and good sanitation and hand-washing practices. And by recognizing the early signs of a potentialStaphylococcus aureus  or MRSA infection, you can ensure that if you do catch the bug, you can get quick and effective treatment and prevent the transmission of MRSA to others.

So go ahead and keep working out just do it safely.